I was watching Peggy Sagers’ most recent webcast earlier in the week and realized from something she said, that lately I’ve been somewhat in a state of paralysis when it comes to deciding what I want to tackle next in my sewing room.

As I mentioned in my previous blog post, I’ve been away from home working for a month, followed by a trip to the Seattle area after that, for the sum total of nearly six weeks in all. During my time away I’ve dreamt of diving into all sorts of sewing projects when I returned home, but the odd thing is, once I faced my fabric stash again I found myself overwhelmed in deciding where to begin and determining what was at the top of my priority list. Before I left, I made muslins, fitted them, traced patterns and invested in beautiful fabric. Now I find I’m hesitant to spend time making something only to find it doesn’t turn out the way I hoped it would. What is this about? Do I sew only out of necessity? No. Creative expression? Yes. A blend of all of the above? Yes.

All of this said, when Peggy said “just do it” during her webcast last Monday, I realized I just needed to start moving forward again, embracing the trial and error process anew. So today, that’s what I did. I cut out a pair of yoga pants from the newly-fitted pattern I created after my last muslin experiment and a cardi from a new pattern I bought last Spring. I chose a basic, neutral-colored knit fabric from my stash which will be useful if the new items turn out well, but not hugely disappointing if they don’t. I’m considering this effort “wearable muslins” stage two.

So, now I will take Peggy’s and actually my own advice too, something I’ve told my voice students for years, simply that there comes a time when we must stop planning and just do it. Thanks for the reminder Peggy! 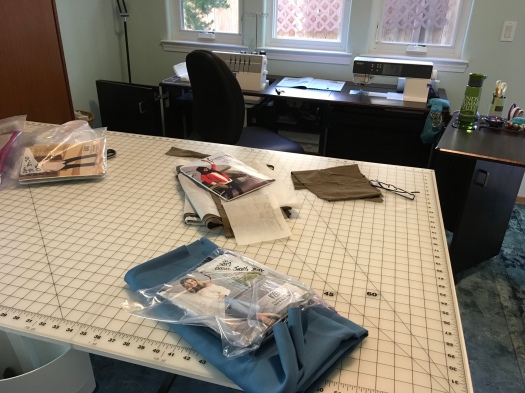